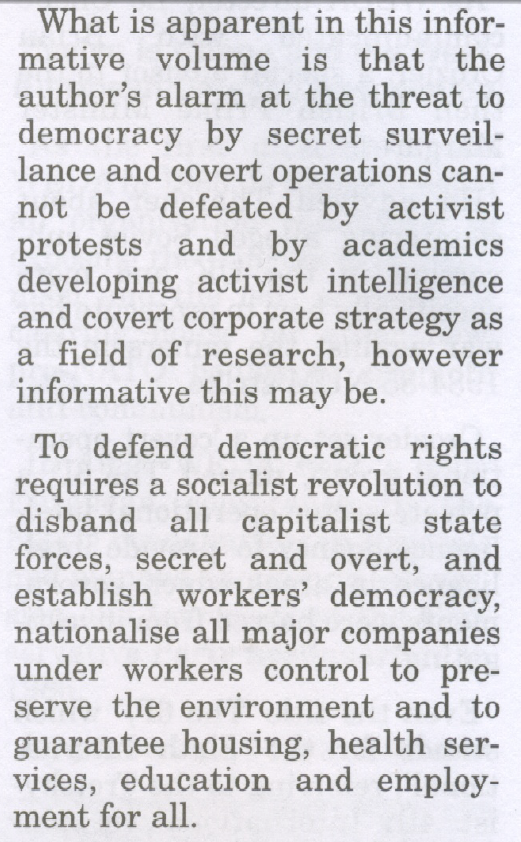 I see my role as an active one, chasing evidence where most of it is secret, bringing together the work of investigative reporters, whistle blowers, and people spied upon. Why? To empower activists, to engage in the debate, to help prepare the right questions in official investigations — to stand up for a vibrant democracy, or what’s left of it, that’s what scholars should do.

The exposure, in 2010, of British NPIOU officer Mark Kennedy as an undercover agent in the environmental activist movement offered insight into how governments monitor political activism. But is intelligence gathering targeting activist groups limited to the state?

In Secret Manoeuvres in the Dark: Corporate and Police Spying on Activists, Eveline Lubbers, an academic, activist journalist and researcher with the organisations SpinWatch and Buro Jansen & Janssen, focuses on what she calls ‘grey intelligence’, the informal networks of co-operation between corporate interests and state agencies that are now central to the surveillance of dissent in Western European democracies.

Spying on activists and disrupting their campaigns against the corporations has become a sinister growth industry. What they get up to is brilliantly exposed in a new book by Eveline Lubbers.

Counterpunch
Everything They Don’t Want You to Know
by Adam Federman
February 2013
p.21-23

McDonald’s and Shell are two of the mega corporations featured in Eveline Lubbers’s book, Secret Manoeuvres in the Dark: Corporate and Police Spying on Activists. Their efforts to undermine activist campaigns, from anti-apartheid groups to animal right’s advocates, reveal just how seriously these corporations take the threat of any opposition no matter how weak or loosely organized it may be.

Corporate and Police Spying on Activists

This blog is about my book Secret Manoeuvres in the Dark, events around it and future research.

In this eye-opening, ground-breaking volume Eveline Lubbers opens up a new field of research. A must-read for anyone interested in grey policing, social movements, social reform and corporate intelligence behaviour.

The exposure of undercover policeman Mark Kennedy in the eco-activist movement revealed how the state monitors and undermines political activism. This book shows the other grave threat to our political freedoms - undercover activities by corporations.

Secret Manoeuvres in the Dark documents how corporations are halting legitimate action and investigation by activists. Using exclusive access to previously confidential sources, Eveline Lubbers shows how companies such as Nestlé, Shell and McDonald's use covert methods to evade accountability. She argues that corporate intelligence gathering has shifted from being reactive to pro-active, with important implications for democracy itself.

Secret Manoeuvres in the Dark will be vital reading for activists, investigative and citizen journalists, and all who care about freedom and democracy in the 21st century.

In the recent frenzy over media phone hacking, the shadow warriors of corporate espionage have escaped scrutiny, until now. Eveline Lubbers' book shines a timely and sharp light on the dark arts of serving and retired cops, spooks and squaddies who are spying, bugging and lying for big business with impunity.